Up to 30% off - Audio Modeling SWAM + Divisimate Bundles available now!

Find answers to your questions and useful resources.

Having a question? Feel free to get in touch with us and we’ll get back to you as soon as we can!

Maybe your question was already answered in our FAQ. Of course we’ll update and expand these over time.

We want to keep improving and building upon the original concept of Divisimate with regular updates.

Visit the updates section to download the most recent version.

Does Divisimate come with any sounds?

No, Divisimate is just a control software that allows you to use virtual instruments more efficiently with a performance-based approach. There are no sounds or libraries or DAW software included, and you will need both to get the most out of Divisimate.

What sounds did I hear in the teaser videos?

The teaser video featured Peter’s personal orchestral template which he built to work with Divisimate. It features a mixture of libraries by Audiomodeling, Aaron Venture, Samplemodeling, Spitfire, Embertone, Garritan and Orchestral Tools.

We made a video dissecting the strings sound from Teaser A, and a walkthrough of a similar orchestral Template.

I've got an idea how Divisimate could be improved, can I tell you about it?

Okay, this is not so much a frequently asked question but an offer:

We want to improve Divisimate and are very open to your ideas. Whatever is feasible to implement and requested by enough people will go on our list for future updates.

Send us your feedback on support@divisimate.com

Does Divisimate run on earlier Windows versions than Windows 10?

We developed and tested the Software on Windows 10 and can not give a recommendation for any lower version of Windows.

While it can be installed and runs on earlier versions, we use some components specific to Windows 10 to improve the performance of the software. This can impact the performance of Divisimate depending on your system and setup and lead to errors and unintended delays in the engine.

How many activations and installations do you allow per license?

You can install Divisimate on as many devices as you like and by default your Divisimate license can be activated on 2 devices at a time. If you want to use it on a third machine, there is a simple “Deactivate license” button in Divisimate which allows you to quickly deactivate your license on one machine and activate on another. This process works essentially in real time, all you need for the activation/deactivation process is an internet connection, and then it is just a few clicks within Divisimate.

Divisimate was developed for the use with traditional MIDI controllers and while polyphonic aftertouch has been added in 1.2, Divisimate does currently not support MPE. We recommend switching MPE off to use Divisimate with specialized MPE keyboards.

We are looking into it, but since the concepts and workarounds of MPE are so similar to those of Divisimate, it will be quite a bit of work to make them compatible.

I purchased Divisimate - how do I get my software?

We use Fastspring to provide you with a safe and easy checkout method. After purchase you should receive an e-mail with a download link on Fastspring’s servers and your personal license key.

If for some reason the download link is not visible to you in your mail program, click on “manage my orders” to find the link in the browser version of Fastspring.

Do you offer any educational discounts?

Yes! If you are a teacher or a student you can contact us at support@divisimate.com

Send us proof of your enrolment status (like a copy of your student/teacher ID or enrolment certificate) and we’ll provide you with a single-use 35% off coupon for our shop.

Note that this discount is not combinable with any other discounts on Divisimate that may be going on at the time.

I run a site that does software reviews - can I review your software?

Shoot us a message to support@divisimate.com and we’ll see what we can do!

Is there a demo/trial version of Divisimate?

That’s something we got a lot since we released and sadly right now the answer is no.

We need to rework some things in our copy protection system in order to make a public demo version possible and reliable. We want to make it happen, but it will take some time.

We’ll make sure everyone knows when we did it.

Do you offer volume discounts for multiple seats?

If you are looking to equip multiple workstations in your company or institution with Divisimate, contact us at support@divisimate.com.

What DAWs are compatible with Divisimate?

We have tested Divisimate with a number of different DAWs.

It works fine in Cubase, Nuendo, Samplitude, Studio One, Reaper, Bitwig, Digital Performer and ProTools. Generally it is not dependent on any other software – as long as your DAW of choice can select and record separate MIDI inputs for separate instruments, you should be fine.

Logic is a bit more complicated since it is not able to record inputs to separate tracks. The Logic Mode allows you to record only up to 16 tracks at a time with Divisimate. There is a video showing the setup of Divisimate with Logic Pro X on our youtube channel.

Ableton Live works fine, however on Mac it does seem to add additional MIDI latency depending on your audio buffer size.

Is Divisimate a Plugin or a Standalone?

Divisimate is a standalone application – it is independent from your DAW and essentially serves as an “interpreter” to your midi controllers.

I have set up the routing in my DAW correctly, but can only hear one instrument.

Make sure you have all routed instrument tracks record enabled. It can be useful to set up a folder or track grouping for that.

Why can Logic Pro only record 16 ports at a time?

Logic Pro is currently not able to distinguish between different Input Devices while recording MIDI.
The only way to record multiple instrument tracks with different contents at once is by splitting them up by MIDI Channel.

Since there are only 16 MIDI Channels available, Logic Pro is limited to 16 simultaneous tracks while multitrack recording MIDI data.

We have invested a lot of time and research into this, but unfortunately there seems to be really no way to record more than 16 individual MIDI Tracks in Logic in one take.

Does Divisimate only support live input, or can I also use prerecorded MIDI files?

With the Loopback Port it is possible to send MIDI from within your DAW (or other Software) into Divisimate.

Divisimate will treat this input the same way as any other data coming from a MIDI controller, so you can have Divisimate interpret prerecorded performances.

You can check out our tutorial video on using the loopback port in Cubase to get an idea how that works.

PC: I am trying to activate my copy of Divisimate, but the activation fails and tells me the license may be active on another machine.

This is an issue that can be caused by Windows Defender under rare circumstances. Try disabling all parts of Windows Defender and then put in your license key again. If the problem persists, shoot us a message via the support form!

Divisimate does not react to my MIDI Controller. What do I do?

First of all make sure that you have selected your MIDI Controller as an input on the settings page in Divisimate.

On Windows, USB-MIDI Devices can only be used by one application at a time. So make sure that your DAW or any other MIDI Software you might use does not use your controller as an active input.

To still use the controller in the conventional way you can use Divisimate as a kind of MIDI-merger and use the bypass function.

Or you can use the Divisimate Loopback Port to send MIDI from your DAW into Divisimate.

I can't see all 32 Divisimate ports in my DAW

First check if you are using a DAW where MIDI Devices need to be added separately (e.g. Studio One), and see if you maybe missed one of the ports. In rare cases on Windows the installation may fail to create all ports correctly. A complete deinstall and reinstall of Divisimate usually fixes this issue.

MacOS: I can't see the Divisimate Ports in my DAW at all.

On MacOS, the Ports only exist when Divisimate is open. For DAWs that do not support plug&play for MIDI devices, make sure to start Divisimate before opening the DAW so the ports can be recognized.

The app only shows an empty network setup and I can't connect to my host.

DivisiControl establishes the connection via network. Make sure that your iPad and you main computer are connected to the same network. Also make sure, that Divisimate has all the necessary permissions to have network access.

DivisiControl looses connection and i can't get it to connect again.

Close the app completely(!) and then freshly start the app.
For iPads made before 2018: double tap the Home button to open the app switcher. For iPads after 2018:
Swipe right or left to scroll through recently used apps and find the app you’re looking to close.
Press and hold the app window, then swipe up (without lifting your finger off the screen) to send it off the screen.

Relaunch the app after that.

Can I run DivisiControl on my Phone?

The iOS App is available for both iPad and iPhone – and there are different Android versions for Phones and Tablets available. 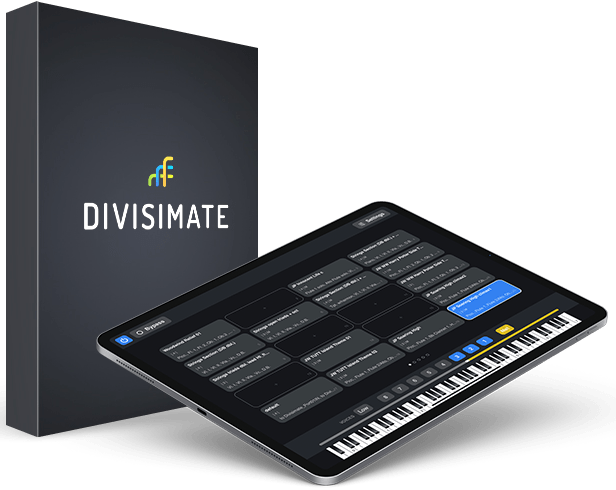 Any cookies that may not be particularly necessary for the website to function and is used specifically to collect user personal data via analytics, ads, other embedded contents are termed as non-necessary cookies. It is mandatory to procure user consent prior to running these cookies on your website.

I'm sorry, there was an issue.

Your cart is empty.